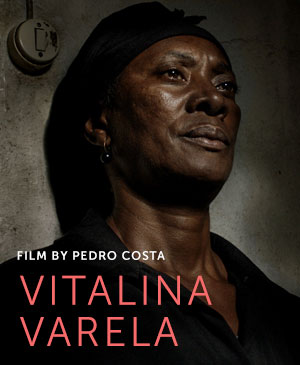 A Film by Pedro Costa

Winner of the Golden Leopard for Best Film and Best Actress prizes at the Locarno Film Festival, and an official selection of the Sundance, New York and Toronto Film Festival, ​Vitalina Varela​ is the masterful new film from Pedro Costa, the acclaimed director of ​Horse Money​, ​Colossal Youth,​ ​In Vanda’s Room​ and ​Casa de Lava​.

A film of deeply concentrated beauty, acclaimed filmmaker Pedro Costa’s Vitalina Varela stars nonprofessional actor Vitalina Varela in an extraordinary performance based on her own life. Vitalina plays a Cape Verdean woman who has travelled to Lisbon to reunite with her husband, after two decades of separation, only to arrive mere days after his funeral. Alone in a strange forbidding land, she perseveres and begins to establish a new life.

Vitalina Varela is a film of shadow and whisper, a profoundly moving and visually ravishing masterpiece.

“A plaintive and piercingly beautiful vision… Pedro Costa is one of our planet’s two or three greatest living filmmakers.”
— Christopher Small, Sight & Sound

“IT’S ESSENTIAL CINEMA. Socially conscious, but dreamlike, elegiac. Stunning pictorialism. In the opening shots of this film, one thinks of Goya and Velasquez; the clouds in the night sky evoke El Greco. Critic’s Pick.”
— Glenn Kenny, The New York Times

“Three and a half stars! A breathtakingly gorgeous movie about love, death and immigration. A tremendous performance [by Vitalina Varela].”
— Monica Castillo, RogerEbert.com

“The best movie of the year.”
— Jonathan Rosenbaum, Sight and Sound

“Ravishing. A singular addition to Costa’s oeuvre, one of the most enigmatic bodies of work in contemporary cinema.”
— Andrew Chan, 4Columns

“Gorgeously photographed. Has a conceptual rigor comparable to the films of Jean-Marie Straub and Danièle Huillet and a visual beauty that evokes Rembrandt.”
— J. Hoberman, The New York Review of Books

“Masterful. Quite possibly the most beautiful film of 2020.”
— Jordan Cronk, Film Comment

“One of the ten best films of the year.”
— James Quandt, Artforum

“Costa has made his most beautiful, haunting film yet. Vitalina is extraordinary.”
— Film Comment