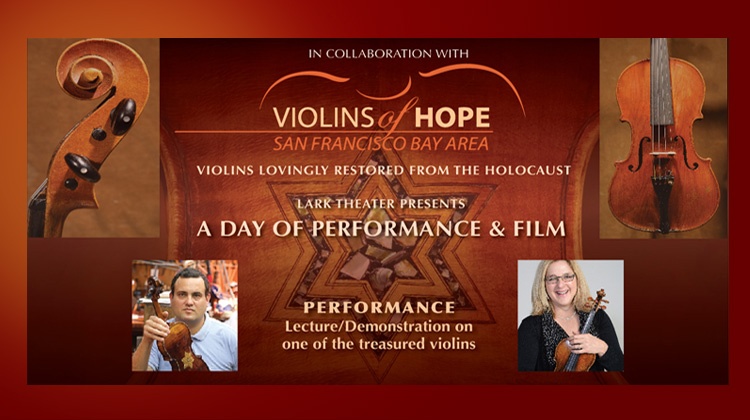 In collaboration with Violins of Hope, the Lark Theater presents a day of performance and film celebrating the resilience of the human spirit, heroism, healing and hope.

The Violins of Hope are a collection of 86 string instruments originally owned and played by European Jews in ghettos and Nazi death camps during WWII, which have been lovingly restored over the past two decades by renowned Israeli violin-makers Amnon and Avshalom Weinstein. The Lark is fortunate enough to have a small selection of these Violins on display in our lobby, and in solo performance.  Plus heart-rending films will also play during the day that connect the heart and the music to those difficult times.

This program is part of Violins of Hope San Francisco Bay Area presented in association with Music at Kohl Mansion, Burlingame, CA

Two film screenings included in the day. Discount packages with one or both films available.

Avshalom Weinstein
Renowned Israeli luthier and Violins of Hope co-founder Avshalom Weinstein will speak about his family’s work, and how these restored instruments, once played by prisoners in Nazi concentration camps, now serve as instruments of peace, social justice and hope.  He was trained by his father, master violin-maker Amnon Weinstein as a violin-maker and restorer of violins, violas and cellos of the highest quality. Co-founders of the Violins of Hope project, Avshalom and his father collect these instruments with their unique stories that date back to World War II, restoring them with love and attention and bringing them back to life as concert instruments.
Click here for more info.

Cookie Segelstein
Violinist Cookie Selegstein will perform on one of the treasured Violins from the collection. More of the restored Violins will be on display in the Lark Lobby.Cookie Segelstein, violin and viola, received her Masters degree in Viola from The Yale School of Music in 1984. Until moving to California in 2010, she was principal violist in Orchestra New England and assistant principal in The New Haven Symphony, and served on the music faculty at Southern Connecticut State University. She is the founder and director of klezmer trio Veretski Pass, and has presented lecture demonstrations and workshops on klezmer fiddling all over the world, including at Yale University, University of Wisconsin in Madison, and at Klezmerwochen in Weimar, Germany.

Cookie was featured on the ABC documentary, A Sacred Noise, and her music can be heard on many recordings and in films, including Everybody’s Fine starring Robert De Niro.

#AnneFrank Parallel Stories is a powerful retelling of Anne Frank’s life through the pages of her extraordinary diary guided by the Academy-Award winning actress Helen Mirren, and through the lives of five women who, as young girls, were also deported to concentration camps but survived the Holocaust.

As a dedication to what would have been her 90th anniversary –and in cooperation with the Anne Frank Foundation — the documentary takes audiences into Anne’s room within the secret annex of her family’s hiding place before being deported, and through read excerpts of her diary intertwined with the experiences of the survivors who lived to tell their own parallel stories.

The Song of Names

The Song of Names

In 1951 London, a young Polish Jew and child prodigy named Dovidl Rapoport is set to electrify an audience of critics, dignitaries and other members of the city’s upper crust, but he never shows and isn’t heard from again. Clive Owen (Dovidl) and Tim Roth (Martin) star in this emotional detective story spread over two continents and half a century. Beneath the film’s stunning and emotional musical revelation burn the horror of a war and the lost souls extinguished from history. A bold journey through friendship, betrayal and reconciliation culminating in the titular Song of Names, the film shows that within the darkest of mysteries sometimes only music has the power to illuminate the truth, heal and redeem.